If you are in the market for a USB turntable, there are many factors that may influence your decision. Aesthetic/functionality, drive type, price, tonearm, and specific features (conversion abilities)  all play a role in the determination of which model is better.

When it comes to aesthetics, it is really a personal preference as to which you prefer, but also the function that the product’s features grant it. In this market, aspects like the base provide both an attractive design and a stable, safe design. The cabinet of the turntable also can provide a sleek look and/or hinder or help the sound production. Dust covers and mounting hardware are also appearance based but also represent the function of the product. The mass of the turntable itself will also control the look and the functionality greatly.

Drive type for USB based turntables has to do with the motor that powers the spinning of the platter. The determination of this feature is mainly based upon the intended usage. The significant differences in drive types are for whether or not you plan on DJing, whether you want a stronger design, and the type of sound quality you are looking for.

Price of the turntable itself is clearly a big factor. However, beyond just the listed price, it is important to evaluate what exactly you are paying for. If there are some parts you really want out of a turntable, you may be more willing to pay top dollar for it, then lose some of the product just to save some money.

The tonearm is an aspect that will determine not only the tracking force but also the pressure transferred to the cartridge. This can affect the playback in very specific ways like speed and start time to really hone in on your specific listening. Cartridges use magnets and mechanical energy to create an electric signal. There are many different types and there are many different factors which come into play on if it aids to the sound.

Specific features is a broad term to cover all the other minor functionalities that might encourage you to buy a turntable or completely turn you away from it. This could be the output connections, the conversion capabilities, and the speeds it is capable of handling. 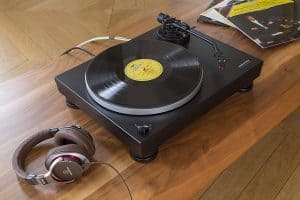 The Audio Technica AT-LP5 has a die-cast aluminum platter that has an anti-resonance ability. It also has a damping mat that will allow for the rotation to be steady and balanced. This mat will also allow for the low frequencies produced to sound better. The product weight itself is 23.1 pounds. The mat is actually 5 mm thick. This turntable has a matte black finish and comes with a dust cover and mounting hardware. This turntable has a very “old-school” type of design. The freedom and opportunity for upgrading your setup are unique and definitely a drawing feature as well.

The Audio Technica AT-LP5 has a direct drive. In this type of model, the platter is imperative for the motor to function Direct drive are typically a much heartier, stronger model and will have faster startup times than their belt drive counterparts. It has a high torque motor. These type can produce a little bit of noise in terms of vibrations, but the good thing is that a lot of the created noises are absorbed by the very thick damping mat.

For the number of qualities that are special to this model, it really is a great deal. It is very high end and produces great sound for what you are paying. On Amazon, it also has a 6-month financing option.

The tonearm of the Audio Technica AT-LP5 is J-shaped. It has an adjustable counterweight, anti-skate adjustment, a lift lever with hydraulic action, and a locking mechanism. For a cartridge, it has a moving magnet stereo cartridge AT95X. It comes with an AT-HS10 lightweight headshell as well. The cartridge is designed specifically for this model, and the combination of it with the tonearm is supposed to minimize tracking error.

Special features include the ability to connect to PC and Mac. It has a built-in phono/line preamplifier and USB and RCA. The capable speeds are 33 and 45 RPM. This converts to MP3, WAV, or other audio file formats.

The Sony PS-HX500 has an aluminum die-cast platter to help establish a balance between strength and mass. It also provides a .2 inch rubber mat to improve the sound.  It has a 1.18 inch thick MDF cabinet that facilitates soundstage quality audio. The entire system is insulated with a glass epoxy circuit board as well and the dust cover is built on the casing. The system weighs 11.9 pounds. It is definitely a smaller version but has a good structure to help its sound and stability. This model has a more minimal and edgy appearance.

The Sony PS-HX500 has a belt drive. This model has optimized spindle-bearing construction to help its sound quality. The motor on a belt drive is independent and moves the platter with a rubber belt. This means that they are not meant for DJing. They also generally have better audio quality due to fewer vibrations and noises produced.

It is a great model and has many redeeming qualities so it’s moderately priced. On Amazon, it also has a 6-month financing option.

The tonearm of the Sony PS-HX500 is a straight arm. It has an integrated shell and this is meant to heighten its longevity and help stabilize the cartridge so that it can help with traceability and dimensionality of sound. You can adjust the counterweight and lifter lever and it also has an anti-skating knob. The cartridge is a moving magnet as well. The cartridge is replaceable but not changeable.

Special features include the ability to connect to PC and Mac. It has a built-in phono/line preamplifier and USB and RCA. The capable speeds are 33 and 45 RPM. This converts to WAV format.

In terms of aesthetics, it depends on what kind of look you are going for. The Audio Technica AT-LP5 has an older, more classic turntable type of look to it. It is definitely a beefier version which can aid in sound production. The Sony PS-HX500 is much blander and basic looking but has a cover built onto it. Both models have similar rubber feet and the same thickness of a mat, so the sound is probably the same there. The platter is also the same on both models. The Sony PS-HX500 also converts the audio over to Hi-res so it has that decoration onto it.

The verdict: Though it is a very close, the Audio Technica AT-LP5 wins here for the potential for sound quality, and overall appearance being more like what you would expect a turntable to look like.

The two models here both have different drive types: belt and direct. Of course, the Audio Technica AT-LP5’s direct drive is good for DJing and typically leads to a stronger machine and has a faster start time. However, the Sony PS-HX500 has better sound quality and less produced noise due to the belt and can not be used for DJing. For the average person, a belt drive makes more sense.

The verdict: The Sony PS-HX500 wins for having a belt drive due to better sound quality and more ease of use for the average user.

Both models are very similarly priced and have the same financing abilities. In terms of price drops, the Sony PS-HX500 was originally more expensive but is now cheaper than the alternative. For the more expensive price point, the Audio Technica AT-LP5 does not have a ton more to offer than the Sony.

The verdict: Sony PS-HX500 wins this one. The price has dropped a lot since release and has many people extremely happy with what they get.

There are many people who think that the tonearm and cartridge style does matter and many who disagree and say there is not much of a noticeable difference. Generally, the longer the tonearm and the heavier, the more stability and decreased error. The J-shaped arm of the Audio Technica AT-LP5 will produce a longer length and most likely a more stable connection. This model also has a cartridge designed specifically for it. However, it also offers the possibility of changing out all the parts to be whatever you want.  The Sony PS-HX500 just has a straight arm and a set cartridge and headshell so there is no room for improvement. It is not a bad setup, but the Audio Technica AT-LP5 allows for upgradeability.

The verdict: The Audio Technica AT-LP5 wins this one for better tracking, better sound, the ability to change out parts. It is important to note that the sound quality differences are very minute though.

Both of these models support speeds of 33 and 45 RPM. They both connect to PC and Mac computers. The Audio Technica AT-LP5 converts to MP3 and other file types in addition to the Sony PS-HX500’s only WAV format. This allows for more freedom of files and saves some time in that regard. Most of the additional features are the same between these two models.

The verdict: The winner here is the Audio Technica AT-LP5 only because it converts to additional file types. There really were not many determining factors here between these two models, but if you were comparing other types, special features would certainly be home to many discerning factors that would probably be the deciding factor on which one to buy.

Both of these turntables are great quality especially for the price that they are given at. They are both pretty aesthetically pleasing designs with the Audio Technica AT-LP5 being slightly more traditional and retro, while the Sony PS-HX500 is definitely more minimal, but also has a hardy structure that ensures its quality despite its smaller size.

They both differ in their drive type which is what accounts for the largest difference between the two. The Sony PS-HX500’s belt drive provides for more universal usage, while the Audio Technica AT-LP5 ‘s direct drive is more useful for DJing or just a more streamlined, less hassle type of machine.

The pricing of the two models is actually almost identical. What they bring to the table really is very similar and therefore, the cheaper Sony PS-HX500’s lower pricing makes more sense.

Tonearm and cartridge are very debatable features of a turntable. The unique J-shape and specifically made cartridge really make the Audio Technica AT-LP5 stand out and also offer impeccable sound quality. The Sony PS-HX500 remains very traditional with its straight arm and un-modifiable cartridge. What the Sony potentially loses in terms of sound quality, it probably makes up for in its insulated and well-structured casing, though.

Lastly, in terms of unique special characteristics, there really is not a whole lot of differentiation in the two models. The one redeeming quality for the Audio Technica AT-LP5 is its ability to transform audio files into MP3, WAV, and more while the Sony PS-HX500 is limited to only WAV.

Overall, in terms of winning 3 out of 5 comparisons, the Audio Technica AT-LP5 is the model to buy.