What turntable does Harvey Specter have?

If you’re a big fan of the hit law-based TV series Suits, you might have wondered at one point or another what kind of turntable Harvey Specter has.

Considering how big Harvey Specter’s vinyl collection is and how frequently the show plays a soundtrack for the viewer as it is spun on Specter’s turntable, it is not surprising to find that his turntable is pretty awesome.

In this article, I’m going to answer this question for you and hopefully leave you with some valuable information to consider the next time you see Harvey Specter’s turntable in Suits.

So, what turntable does Harvey Specter have?

Surprisingly, this turntable is actually quite affordable. This is surprising when one considers Harvey Specter’s lavish lifestyle and seemingly high-end taste which warrants increased spending. In fact, when one considers the overall best turntables under $500, the Pro-Ject RPM 1.3 Genie takes the crown.

Pro-Ject is a staple in the turntable industry, with a total of 24 different models available on their catalog. As a company, their goal is to provide high-quality turntables to the masses at an affordable price. As Suits is an extremely popular show, (over 1,000,000 viewers per episode), it makes sense that they would try and take advantage of increasing interest in and sales of their product by using product placement.

While we will dive into specifics about this turntable shortly, one thing to consider as to why it is presented in such a glamorous way in Suits is its ultra-cool design, which gives it a luxurious, exotic look that grabs the viewers attention. Also, Specter’s turntable and vinyl collection are a testament to his father who was a saxophonist before he passed away in the show.

After researching online, I have found several notable features about this turntable that highlight its high-quality build which earns it a right to be used by the one and only Harvey Specter. 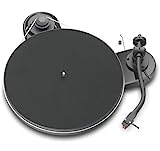 One notable feature about the Pro-Ject RPM 1.3 Genie is that the bearing housing is metal, rather than plastic. Generally, metal is considered to be more durable and structurally sound than plastic. Also, a disadvantage of having a plastic bearing housing rather than metal is that it can begin flexing over time which can lead to breakages in other components of the turntable.

On the Pro-Ject RPM 1.3 Genie, the motor is actually completely separate from the turntable.  The motor is an a.c. synchronous type that uses a silicon rubber belt to drive the platter. While this motor doesn’t have an electronic speed adjustment, it does allow you to switch between rotational speeds of 33.33 and 45 rpm by manually moving the belt on the two-step pulley system from one to the other.

While this drive motor is separate from (not touching) the turntable, it will still be placed on the same platform as the turntable, so vibrations could still travel from one of these sources to another.

The plinth (main base) of the turntable is made of lightweight MDF. Pro-Ject takes their design a step further than the competition by using MDF for the material of the platter as well (the part where you place the vinyl record). While most turntables manufacturers use flimsy metal platters, the MDF used by Pro-Ject is more sonically inert, which means the music playing off the turntable will sound better.

Two other important components of turntables – the tonearm’s headshell and arm-tube – are actually a single piece of aluminum that comes with a mounted counterweight that works to reduce cantilever forces in the Pro-Ject Genie 1.3 model. This, along with a string-and-weight anti-skating system ensure the sound playing off the turntable is smooth and pristine.

Another unique design feature of this particular turntable is the S-shaped arm-tube, which is 8.6 inches long and allows the user to adjust its vertical tracking angle (VTA) up or down depending on personal preference.

To top things off, this turntable comes with a Sumiko Pearl moving-magnet cartridge which guarantees smooth performance for years to come.

Now that you know some of the coolest features of this turntable, let’s go over the user experience and what you can expect from this turntable.

For setting up and getting started with the 1.3 turntable by Pro-Ject, be sure to always start off by placing the turntable on a surface that is heavy and sonically inert. In other words, place it on a surface that won’t be disturbed (vibrate) by passing cars, trains, people walking, etc. This can be accomplished by placing the turntable on a chunk of marble, granite, or a pre-cast concrete paving block with a sheet of soft foam underneath.

Note: When placing the motor in the correct section of the turntable, make sure it does not touch the plinth.

Once you’ve found the perfect spot for your turntable and have it placed, just double check to make sure the cartridge is perfectly aligned within the headshell. After this, simply set your tracking weight and anti-skating to your desired levels and you’re ready to start spinning some records!

If you want to be sure that everything is in order and set perfectly, a strategy you can implement is taking a stethoscope and holding it against the turntable as it is spinning. As long as you don’t hear any hums or vibrations coming from the motor to the turntable, you are good to go!

As long as everything is set up correctly, users of the Pro-Ject RPM 1.3 Genie generally give it positive ratings regarding sound quality. You can expect a quiet motor without any significant vibration, sustained good pitch, no distortion, and consistently good sound quality.

If you do happen to hear some rumbling or motor noise at all, usually the solution is to simply re-separate the motor from the plinth, as the slight gap between them might shrink over time.

Don’t believe me about the sound quality on the Pro-Ject RPM 1.3 Genie turntable? A lab study was conducted by Newport Test Labs sought to check the speed accuracy of this turntable using a 3000Hz test tone and frequency counter from a Columbia Labs test record.

Wow and flutter, which are two popular metrics that help in determining the quality of a turntable, were also measured in this study. This study concluded that wow and flutter on this particular turntable had an overall unweighted RMS (root-mean-square) result of 0.08%, which is considered an excellent result.

Also, this study tested to see how belt tightness effects speed accuracy and wow and flutter levels and concluded that belt tightness did not influence these results at all. This is good news, as it means you don’t have to worry about getting the belt tightness exactly right.

Now that you’ve read through the entirety of this article, you know exactly what kind of turntable Harvey Specter has, noticeable features of that turntable, and also exactly what you can expect from the turntable if you decide to purchase one for yourself. Overall, this turntable is one of the best value turntables in the industry, as it is a high-quality turntable offered at a super low price.

If you are at all considering purchasing a new turntable for yourself, by following Harvey Specter’s lead and going with the Pro-Ject RPM 1.3 Genie in any of its three stylish available colors (red, white, or black), you can expect high-quality sound and performance for years to come.